Re-Purposing for a Good Cause

Our society is very much throw away, and being a daughter of parents who lived during the war, it was drilled into me not to waste. Therefore, my initial reaction is put them away in case someone comes around to stay! There is only a certain amount of times that you can do this without it taking over your space completely, and there really is something to be said for space that is clutter free, especially when you live in a small apartment.

Torn by my desire to have room to move around, and not wasting, I decided that actually I can make these items useful again. Even for a short time. What’s more I would get much more out of it! Satisfaction!

They are all easy to scale down and being able to sew I decided to re-purpose these items into animal beds and give them to my local dog charity. What better way to utilise items that would normally end up in black bag.

Yes, it takes time to re-purpose anything, and yes there was that part of me that thought bin, put, don’t see no more, don’t worry about, but if I focused on benefiting another, it didn’t feel like a chore or guilt trip. It was now a desire – To give to a good cause. A dog or cat that hasn’t found it’s forever home will have something comfy to sleep on. 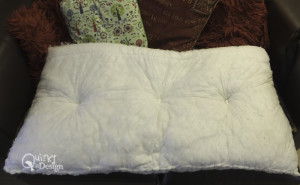 Pillows are easy enough to wash, the duvets (poly flock type) needed to be cut into pieces, because you can’t fit a king size duvet in a washing machine without it either struggling under the weight, breaking the springs as it tries to spin or melting the contents of said duvet due to friction against the glass – can you tell this is from experience? Drying is a bit of a pain too, so best done in summer out on the line.

Sewing similar sizes of duvet pieces and stuffing pillows in between to bulk out, I sealed the sides together with a blanket stitch, using heavy thread.

Securing the cushions in place with more stitching. I now had a bed inner. For the covers I used old bath towels of similar size. Put in a zip in at top and quickly sewed all around. The covers could at least be washed a few times.

With a bit of an inspection from Quality Control officer Aggie Panther, who gave me the paws up – this morning I took them to my local animal shelter NAWT in Watford. They were very happy to receive them, I guess they just get blankets donated normally.

I knew it would be dangerous visiting, I have a rescued kitty and a dog would be nice, but my place is just not big enough for a dog as well, so the thought of a couple of pooches being a bit more comfortable is the next best thing. As well as some space! Although a few more to make – when I get the chance.

Whilst there I was invited to look around and see the dogs. Oh dear how could I refuse! Alas, it always makes me feel sad seeing caged animals. There was one little one that I would have dearly given a home. His name is Bryn, a Lurcher Puppy with grey eyes, very unusual. I had to leave pretty quickly before my mind tried to figure out where I could put him!

If you have some old bedding, do consider re-purposing them or just donating to your local animal charity and make a few pooches or kitties comfortable while waiting for their forever home.