Old can be beautiful too!

Starting with a second-hand (actually third-hand) Octagonal Summer House, which lets face it anyone in their right mind, would choose a new building. Well I am not called quirky for nothing!

There were many variables and obstacles involved unfortunately, and why I ended up with this 6 x 6 foot pre-loved wooden building was due to size, time and light and hopefully, cost saving.

I did find a new building, that I liked, but the delivery would take over 10 weeks from point of order, and I couldn’t do that until I had permission. Sadly, the chappy who surveyed the area chopped a finger off in a fire door (OUCH!) and nobody else could take on his cases! (??)
I was also due to have surgery which clashed with delivery time and I really needed it to be erected before winter. I was kind of pressured to make a decision. This year or not!

So one fateful day, I came across this summer house on eBay and outbid everyone. At the time it was a good idea! It had so many windows which means natural light (which later I regretted that thought!) Alas, it was only after I got it home at a huge expense and effort did I realise I would turn into the reluctant renovator!

Rotten To The Core

The first thing I noticed, was the base as it lay on my small patch of grass taking up most of the garden in the process.

Oh my goodness! It’s going to cost me a fortune to replace this! The wood needed, the time to rebuild it, and do I have the skill to do it? Questioning my own sanity and judgement I thought of projects that I had done before. I have built some weird and wonderful things in my time! One of them a laser system from scratch (pcb design, construction and casing) to observe Newton rings. Yes, I did it, but I was petrified in turning it on in case it exploded! Thankfully, I had my senior technician – who, had more faith in my abilities, and who did it for me. It was used many times, even at Oxford University – so I had to think positively. Still, I knew it wasn’t an easy task, and I had no go to’s if I messed up. No one to help me now! Oh heck, what do I do? Cut my loses or take on the challenge?

I took on the challenge of course, but I felt that way the whole way through. What a bum idea this was!

I purchased reclaimed wood from our local centre, beautiful pieces of wood at a mere fraction of the price of a DIY store. I bought in bulk for the floor itself. I started off with measuring etc, but found it increasingly difficult as the base was all different widths, plus it was blinking difficult, as angled – I don’t do angles! So, I retraced what was there already, estimating bits that had already dropped off (I am very much “by the eye” kind of woman anyway). First obstacle over, and it only took me three weeks! A little bit at a time, is all I can manage anyway and I was fast coming to realisation in between wet weather, that it wouldn’t be up by winter.

Oh dear, please peeps never by a second hand shed off eBay unless you view every part before hand. Sadly, I didn’t load it or unload it, and it was only as I was working my way through I found more and more rot.

It took over 4 months, with some very painful moments including the usual cuts, bruises, hammering of thumb. The stepping back on a triangle paint scraper that went straight through my shoe, stabbing me deep in the sole of my foot, did make me use some very choice words!

The whole structure had to be rebuilt or repaired in some way.

Roof: Roofing OSB was okay bit of the wood attached were rotten and had to be replaced not my best attempt I must admit (don’t do angles remember! ) but they fit. The felt was ripped in many places. So I decided if I was going to have to be replaced, I would do shingle style. I was really pleased with this, but very time consuming, cutting all the pieces off a roll, and nailing them on before putting each “pizza” slice up.

Then I found that they weren’t the original boards, and so my conservative (normally liberal) estimation of spacing meant when I got to last 3, they didn’t fit leaving gapping spaces. I had nailed and screwed them on by this stage and bad weather was coming so improvisation is what I opted for until the summer when I will cut some new pieces and re-felt. It’s sturdy and water tight though!

Windows: The windows, had to be removed, the putty so hard, that moss was growing in between meaning it would leak when it rained. I had to heat the putty with gun to soften it enough (which was barely soft) to scrap it out, took for ever! I then used silicon on both sides when replacing and structuring the outer so water would run off. OMG! Silicon is horrible stuff, and a tip for anyone. Pampers baby wipes! They are amazing at getting it off your hands and everything else! Oooops!

Roof Batons: The roof batons at the end were so rotten, and would cost me nearly £100 to replace, so I soaked it in Ronseal wood hardener (amazing stuff!), and moulded the ends with resin, where wood had just gone to make sure it was hard. Thankfully they weren’t weight baring as such, but a bit of a pain as had to grind down in places to lie flat.

Lock: Replaced the lock which was broken.

Door: The door wouldn’t close when I finally did get it together so had to rehang door.

Painted: Painted every panel inside and out 4 times on both sides with Cuprinol wood shades.

Putting it together took over a month alone. I could get the base level, but then had to changed it around and around, as I couldn’t get the panels to fit the base and each other. It was like a jigsaw puzzle. Eventually I got it reasonably tight together. The roof was a nightmare too. All in all, I was ready to take it to the dump so many times, but I am persistent by nature, and determined to get my studio up.

That persistence paid off. It cost me just shy of the price of the new shed I wanted, which was around £500 and that was with paint, but to buy one of these summer houses with the Georgian windows and a proper lock, would have been anywhere up to £2000.

Was it worth it?

Yes, and no. The time, energy and expense was more than I wanted to spend out on a second hand building, it might not last more than a year.

It’s certainly better than having to rent and go to a studio outside (means I can go out there any time of day), and whilst it doesn’t have power as such, just a protected cable from main building, for a bit more light and heating. if I put a solar panel at end of garden and battery source (the next project!), I might be able to get a power source that doesn’t feed off main electric. I am content to have this for as long as I can, relieved to have trained skills and ability to learn more skills along the way in order to do it; plus the whole experience and lessons learned were invaluable. You can read more about that here.

Would I do it again? Not sure on that one! 🙂 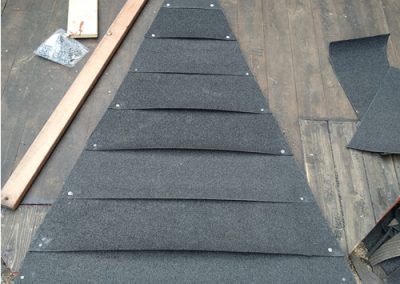 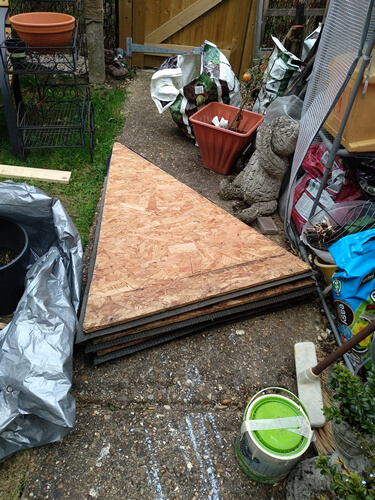 Pile of Pizza You can’t eat 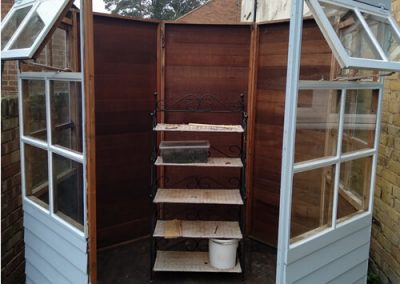 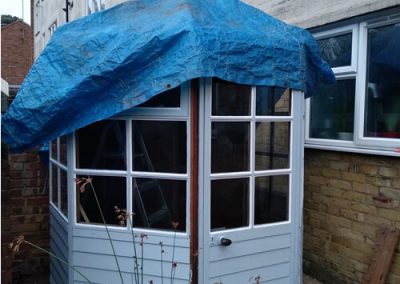 Putting the sides together 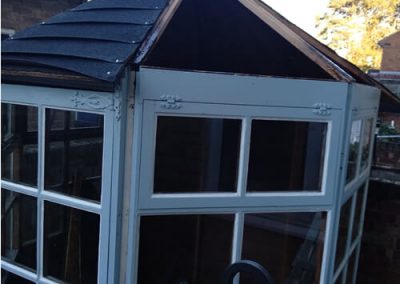 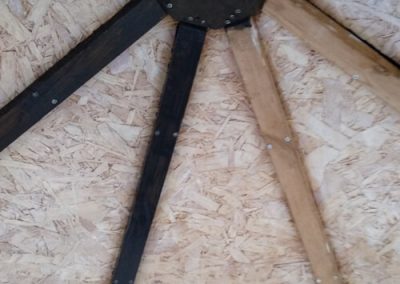 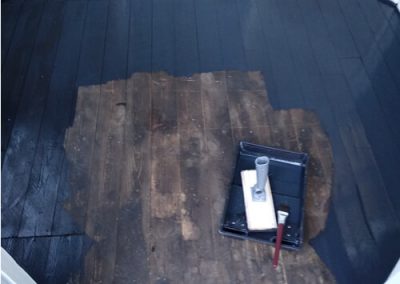 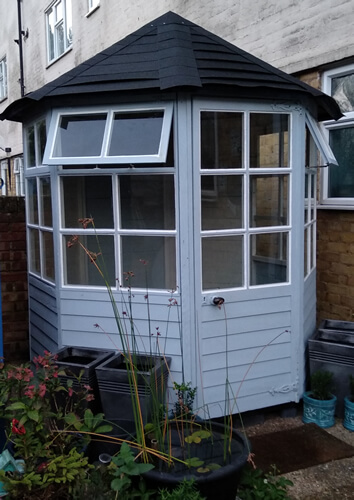 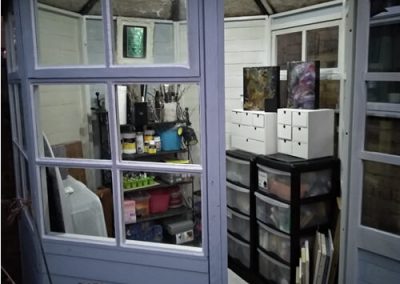 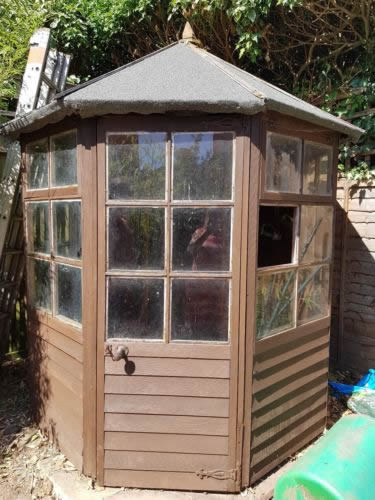 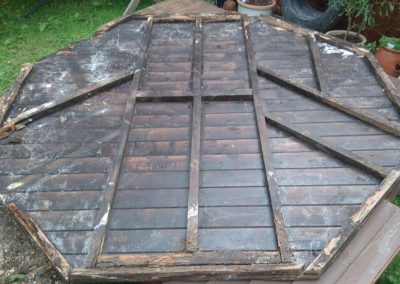 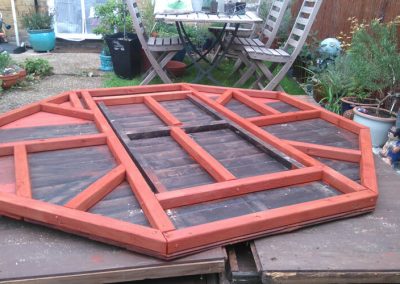 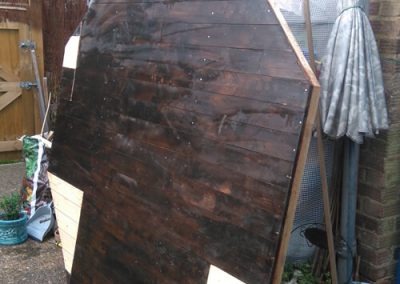 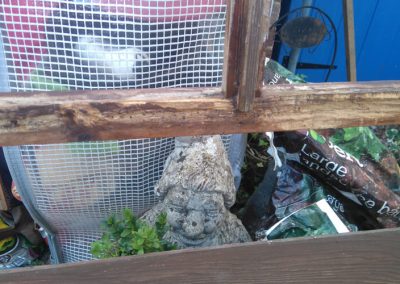 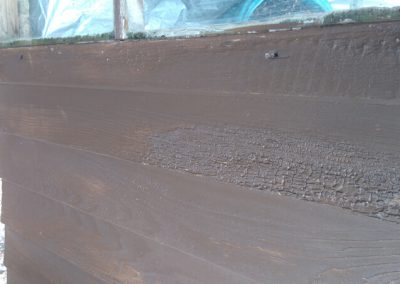 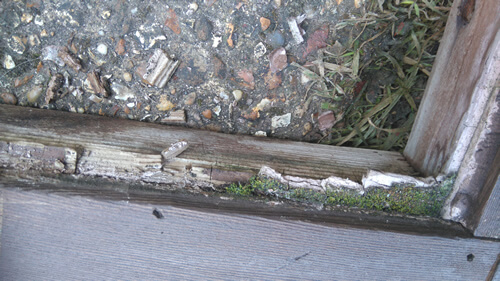 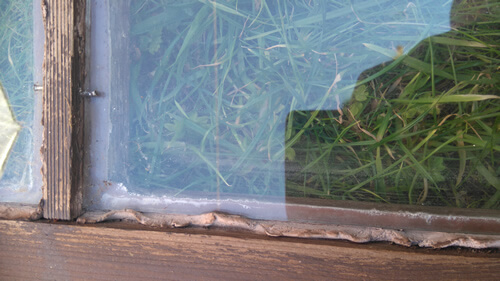 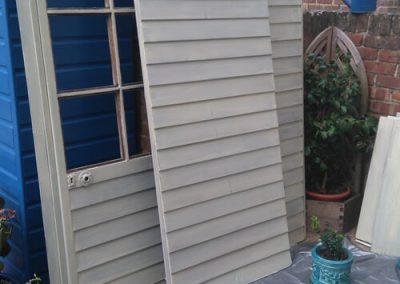 Using up old shades colour as base for blue