Making Use Of An Imperfect Image

Few days ago, I made some space for a little creative time with one of my photographs. As I was creating the look I wanted, I thought it might be nice to write how it was created, and why. As I recall I didn’t have a clue before I found out how to do it, but just loved the effect – that being a photograph with a texture overlaid.

Digital photographers often experiment with certain methods of shooting or see something when they took the shot, which kind of gets lost upon download. You are often left with lots of images that are pretty much useless, sitting on your hard drive waiting for some attention.

For the most part it’s better to sift through after your initial downloading phase and remove them because you end up with thousands of similar images, some out of focus, some just not the right angle, a lot duplicated. However, there are always those images, which for me evoke a feeling of potential, I don’t necessarily see it in full at the time, but I hang on to them until a time when there might be.

These images are invariably not perfect, they just have some kind of magick waiting to be brought out of them – and I do this with a textured overlay.

You may ask why add textures?

It’s often deemed by some photographers who are very strict in their discipline or profession, that a photograph must be pure and untainted. I say phooey to that! We don’t all have thousands of pounds to buy the perfect camera, lenses or filters, and in my mind, it’s just the same but from source rather than post-production. Even in the old days with film, upon processing techniques would be used to enhance an image. That’s all adding a texture is, enhancing it. It’s likely those puritans do post-production tweaking anyway, but don’t admit it! Adding a texture is about creating a more pleasing look with a photo that didn’t hit the perfect grade, which can be used for what ever you want after. 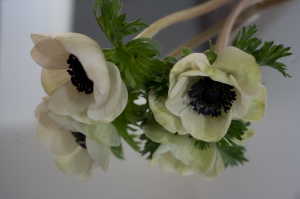 By the way, the intention here is not a tutorial; there are plenty of resources on the web, especially You Tube for this. This is just an example of how you can make a not so pleasing image, into one that will be.

Okay, so here’s the image I was being creative with on the left.  I was experimenting with reflection. I had been given some lovely Anemones and it seemed such a shame for them to just sit in a vase and not be remembered passed their wilting stage. Between the lighting in my sitting room and a very temperamental DSLR things were not going as I had hoped.  Shooting in Raw however, made it easier for me to hang on to some of the images I took.

RAW is the only way to go if you want the ability to tweak images. JPG is basically the finished product, all compressed down into a neat little package, where RAW is just that, it’s every colour you took even if you couldn’t see it; giving you the ability to pull out aspects of a photo. You just can’t do that with JPG as all those colours are now reduced to the most optimal ones the camera thinks is the best. Which is not always the case. For texture-overlaid images though, JPG’s can be used too. 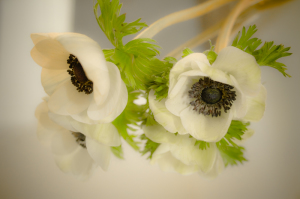 I had put the Anemones on a mirror to create a reflection, it’s a pretty boring image to be fair, but I just loved the way, the Anemones reflected. Upon viewing the RAW image, which always looks dull until adjusted, I decided that textures where the only way to go.

Finally when I got around to completing this, I took the image into Lightroom 2.7 (yes all very old programs) and played with the raw image to get a softer look.

The image was then exported into Photoshop CS3 where I applied a textured layer that I thought was suitable (you can get these free and paid just do a Google search). I used one from Florabella and with my paint tool, removed as much of the overlay as needed to get the main part of the image to come through, tweaking colours, saturation, brightness etc until I was happy with the image. Sometimes I exported that image back again to Lightroom where I tweak it very slightly again, I didn’t with this one. 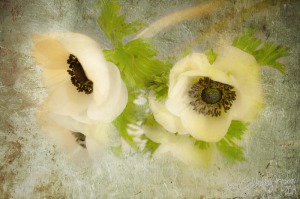 The final image which I called “Upon Reflection”

An image can take as many layers as you want, for example, different layers of colour or texture, tweaking and removing as you go along depending on what you wish to create. Personally, the most I tend to use is one or two layers mostly duplicate, as it becomes quite involved, can make your image look muddy, and you can spend hours if not days on one particular image.

As you can see the final image has been enhanced, it has an arty feel, drawn even, which is what can be achieved using this method, it’s kept it’s essence, and is now more pleasing to the eye. This image can be used for cards and wall art etc.

There are some fabulous textured overlaid images out there, with complex setting up of the subject/objects and enormous amount of tweaking; my motto though is “keep it simple”.

Hopefully dear visitor, you will be inspired to try out this technique on your own photos. Do leave a comment if there is anything you would like to know, and maybe I can point you in the right direction.